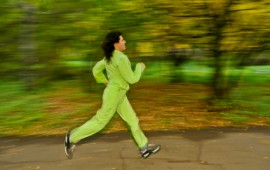 I had an engaging conversation with a friend who visited the office this week about her experience as a participant in a 15K race.

The interesting thing was – Meghan was never a runner – she was simply inspired by her best friend who competed in the Disney Marathon the same year.

It sounded very familiar. I, too, am not a “runner” per se. However, it’s a nice jolt to my usual walking or elliptical routine.

Meghan thought “With a couple months of training, surely I can at least finish the race – no promises on what place I’ll come in!”  For someone who “chucked” (a gymnastics term for “going for it  however unprepared”) my one marathon thus far, I was interested in her road to success. Meghan’s answers will likely inspire you to do something you have never done before!

I became serious after my sister helped me to create a running schedule.  Having a schedule to refer to made my goal seem all the more achievable.  Each week had its own goal.  Every week I increased the duration of my runs.  I started off at .5 miles, and believe me, I was winded after that!  After a while, though, I was feeling pretty good about my progress; after a couple weeks, a 3 mile run was doable and even…dare I say…enjoyable!

Yes.  I remember one day while I was running, I got shin splints really bad – they were so painful!  I cut my run short and cried on my sister’s front porch.  I remember my niece asking my brother-in-law what was wrong with me.  He replied by saying “She just wants to do better.” That was the truth, too; I wasn’t crying because of the pain – I was crying because of what the pain was preventing me from doing – working toward my goal.  After talking with a couple of people I realized that shin splints are an indicator of soft tissue inflammation, not any type of failure, and it’s normal for runners to experience them!

It felt awesome!  I was nervous at first, but soon the scenic view and the energy from the crowd drowned out my nervous thoughts.  Only a couple of steps into the race, I realized that all of my hard work had paid off; I was going to make it.  I had friends doing the race who I knew would finish long before I would, but that didn’t matter because my intention was never to win.  My intention was to challenge myself.  At the end of the race, I sprinted across the finish line, got my medal, and went home feeling accomplished – nothing else mattered.

I would say: just do it!  It’s easy to say what you aren’t capable of when you’re standing on the outside looking in.  But sometimes you don’t realize what you are capable of until you are in the midst of it all. If you’re interested in taking the next step and setting a goal, register now for the Shannon Miller Lifestyle Women’s 5K Walk/Run and sign your children up for the 1 Mile Children’s Fun Run! If you’re not in this area check with area running clubs to see what runs are coming up in the spring. Now’s a great time to start training! Challenge yourself by participating, walking isn’t a cop-out it’s a workout!  You’ll be surprised at what you are capable of!