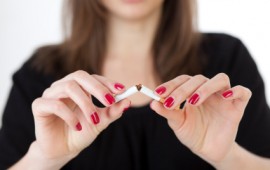 Waging War on the Tobacco Industry?

The World Health Organization (WHO) has deemed this year’s theme on World No Tobacco Day is “Tobacco Industry Interference.” Sounds like all out war! Take your part, by talking to a loved one you know who is a smoker and encourage them to put their dollars into another habit- such as the gym or by chewing sugarless gum.

“Tobacco use is one of the leading preventable causes of death,” says the WHO website. “The global tobacco epidemic kills nearly 6 million people each year…” The issue, they say, is the undermining of science by marketing. Scientists and doctors talk up the dangers of tobacco yearly while the tobacco industry continues to market for young supporters who become addicted to nicotine, usually at an early age.

In the United States, the National Institute on Drug Abuse government office says that nicotine is “highly addictive.” They go on to say that tar in tobacco products causes cancer and emphysema, and that pregnant smokers have a higher risk of miscarriage and low birth weight babies. They also blame respiratory illnesses in children on their smoking parents.

In youth, it does not seem that the stats are getting any better. In 2010, almost 20% of high school seniors had used tobacco. So have 7% of eighth graders. Eighth graders are usually 13-14 years old.

With all that we know about tobacco and addiction, why are kids using tobacco?

According to kidshealth.org, 3900 kids become regular smokers EVERY DAY. Why? They are lured in to the marketing scheme that smoking looks cool or makes them look grown up. Parents that establish a strong relationship with their kids and discuss tobacco openly with them have better odds than parents who ignore the problems. Overreacting also does not help children. Keeping a calm, open conversation helps kids learn about nicotine without feeling judged. However, parents should keep rules about smoking.

What do I do if I’m the smoker?

#1. Tell your kids that you made a mistake by becoming a smoker.

How do I quit smoking?

Nicotine is an addictive substance, so quitting is not going to be such an easy prospect, especially when nicotine is attached to emotions, such as celebration, anxiety, or stress. SmokeFree.gov says that getting past the initial craving is the best way to get through it.

Combat craving to smoke by:

Do you need help?

SML TIP:  Quitting smoking is a major life change, and something that will take practice. But it is important. Put it at the top of the list. Quit smoking for yourself, your family, and your future.