The Wiggles Are Back! 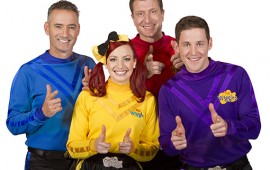 Moms and kids everywhere, rejoice! The Wiggles are back and getting kids moving like never before!

I had the incredible opportunity to have a live chat and personal concert via Skype with The Wiggles and my family.

You know The Wiggles of before: There were four guys and a rowdy crew of animals and a pirate, who sing simple but fun kid-rock. Every under-6-year old in the world jumps up and starts dancing, singing, and moving to this infectious beat, the simplicity of the melody, and the fun of the movements. Are your kids still watching the television show? Many of us still watch it and tape it, but the shows on American television are twenty years old! Can you believe it?

Well, the Wiggles never stopped. They never slowed down. They toured and played many a sold-out concert across the world, in several formats. Dorothy the Dinosaur, for example, had her own very popular tour group in Australia. For twenty years, Anthony and the gang have cranked it up for little kids, out of their love for all things childlike and fun. Over the years, three of the members, Jeff, Murray, and Greg, have retired for various reasons. But this did not stop Anthony or the rest of the crew, and now they have found 3 new musicians to join them!

The Wiggles of today includes Simon in red, Lachy in purple, and Emma in yellow.

Yes, there is a full time female singer with the group now! But she says she is NOT the lead of the group. No, in fact, they are all leads in the group. I heard it first hand last night. They now sing in beautiful four part harmony. It’s not studio-ized. These folks can SING. They sound fantastic together; almost mesmerizing. Every Mom in the world is going to want to play their 4-part harmony of “Twinkle Twinkle Little Star” before the kids go to bed, for the sheer beauty of it. It sure was music to my little one’s ears. But, don’t think she went straight to bed! She was too amped up that The Wiggles sang to HER! They even sang “Happy Birthday” to her in four part harmony.

Simon has a background in musical theatre. In fact, he played in “Phantom of the Opera” and “Cats” in Australia. Lachy has been on the crew of the Wiggles for a while, and has now taken a lead role. He is also learning the saxophone, which we all hope to hear on the tour soon. Emma is a percussionist and vocalist.

The Wiggles are touring the United States currently, so check your local listings (such as Eventful, Jacksonville.com, Eventbrite) for concert dates.

I was so impressed with their demeanor. They are kind and sincere folks who genuinely took an interest in me as much as I in them. I enjoyed our visit tremendously. They were personable and very funny. We had quite a few laughs, and they broke into song quite a few times. How inspiring. If you loved The Wiggles before, you will continue your love for them. If you don’t know The Wiggles yet, it’s time to get to know them. In fact, Anthony was sharing with me that they are on their second generation of Wiggles fans out there, because parents who grew up on The Wiggles are singing the music to their kids. This means, of course, that the music of The Wiggles is becoming folk music, and will continue being passed down. That’s the biggest compliment to a musician that I can think of.

We know The Wiggles music is here to stay!

See more of The Wiggles :