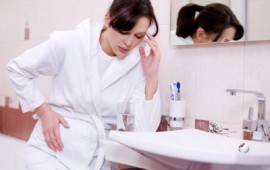 Ahh…it has finally been announced! John and I are so excited to finally share our news. We did wait a touch longer than typical. We had to tell our parents, of course, but swore them to secrecy. With everything we’ve been through in the last couple of years, we just didn’t want to jump the gun. We waited close to 4 months before telling, Rocco, who is now three years old. After that, we were excited to share the news with everyone

It’s always nice to be able to finally announce a pregnancy. Not only because you want to share the news with everyone but it gets more and more difficult to hide the baby bump (particularly when your job revolves around fitness and television, lol). I feel like the first 3 months can be the most difficult for a woman. Not only are you dealing with morning sickness and extreme fatigue but you can’t tell anyone why you carry a plastic bag and excuse yourself from meetings constantly. My son starting asking me “Mommy, what’s nausea?”

With Rocco, in particular. I worried that he may think that I was sick again. From his eyes, it would seem like the same thing I went through during chemotherapy…lots of nausea and being tired all of the time. I didn’t know how much that had really impacted him since he was so young but it still concerned me. I wasn’t being the active mom he was used to. Instead I would lay on the couch in his play room while he played. And while I don’t typically let him watch television, I did break down at times and put on a bit of Cat In The Hat. (which I have to admit is a pretty good show and the Cat is voiced by Martin Short which is kind of fun for the parents)

I was torn between telling him too early and risking that he was going to get his own ideas of why I wasn’t acting like normal. But in the end I think it went well.

Aside from my concerns with Rocco, were the day to day struggles of keeping food down and trying to stay healthy while working and taking care of family. My parents were wonderful, coming in for a week at Thanksgiving which gave me plenty of time to rest while they spoiled Rocco.

They were wonderful, and while I missed most of Thanksgiving I made it through Christmas cooking the turkey (yikes, nothing like staring at a raw turkey to settle your stomach) and eating a touch of stuffing. By New Year’s Eve, my 24/7 sickness went down to maybe 18/7 and I had a system that seemed to work:

Roll over at 5am and eat something bland (1 peanut butter /cracker) take my Zofran (prescribed by my physician because I wasn’t keeping anything down and continued to lose weight) a few sips of apple juice and back to sleep. By 7:30am it was up and at it with Rocco. The system worked pretty good and set me up for a manageable day. (as long as I didn’t have to be in a car….sorry Nick).

I know there are a few lucky women out there that don’t battle morning sickness or may not have it to the degree of others. So don’t let it scare you if you haven’t had kids yet. I count myself lucky that at 4 months mine has subsided and I’m back on track eating and gaining weight.

I try as much as possible to focus on the good things. For me (1) I was sick 7 months with Rocco so 4 is a blessing, (2) I may not have felt great, but I would not change it for the world, morning sickness meant I was actually expecting another baby!!!!

So, if you are going through the difficulties of morning sickness try to remember that it won’t last forever. And while different things work with different women (and even different pregnancies) there are things you can try in order to gain relief. For example:

During my first pregnancy, I wrote a Healthy & Balanced Pregnancy Cookbook along with celebrity chef Jessica Bright.  In it we have shared some incredible pregnancy friendly recipes, each marked with the nutrients that a woman needs during this special time. There are even some “not so smelly” foods that you can cook which your family will love and you’ll be able to enjoy as well. The book is full of tips and tricks for everything from morning sickness to those cramps, aches and pains.  So whether you are expecting or you’re in need of a special gift for a friend or loved one, you might check it out.

If you are expecting, good luck on this wonderful road. Check back here often as I continue my blog. I’ll be sharing my own stories as well as sharing some great information and products from mommies that are in the know!