About Halloween – Fun History and Trivia 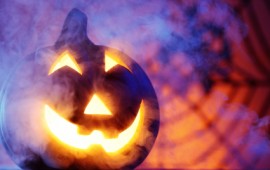 The SML Team did some research to find out more about Halloween, and here are some of the most interesting facts we found about this first holiday of the fall holiday season.

Where did Halloween come from?

Some 2000 years ago, the Celtic people believed that deceased loved ones would come back to visit on the last day of the Celtic year, October 31, which they called “Samhain,” and move on to the afterlife on November 1. They would leave fruit and wine on their front porches for the spirits, and wear masks while they were out of the house, to trick spirits into thinking that they, too, were spirits.

Later, the church adopted November 1 as “All Souls Day,” celebrating the souls’ ascension into heaven. The people continued celebrating Hallow’s Eve (later, Halloween) the night before.

Why do we trick-or-treat at Halloween?

As British and Celtic immigrants came to America, this became a fun tradition for kids, where they would go out to neighbors and play tricks or jokes on them. Later, around the 1950’s, it became a fun game of trick-or-treating.

Why do we carve pumpkins at Halloween?

The tradition is also from the Celtics, who carved gourds and turnips on their holiday Samhain, as messages to their deceased loved ones. The lanterns also guarded against unwanted dead souls. The lanterns had a fiery coal in the inside, and were left on the front porch of the house. When Celtic people moved to America, they discovered a much better gourd to carve: the pumpkin! At that time, it was native to North America. Now, pumpkins grow everywhere but Antarctica.

Why candy corn for Halloween?

A candy maker, George Renninger, started making the tri color candies in the 1880’s, as a celebration of the corn harvest. Now, Brach’s makes 2 billion candy corn by machine every year.

Why do we bob for apples at Halloween?

People believe the bobbing for apples tradition actually came from Ancient Rome, when they would pay patronage to the goddess of fruit, Pamona.

Source for our Halloween Facts: The History Channel

Do you know another interesting fact about Halloween? Please share!