Team Up with Cinnamon for Balance? 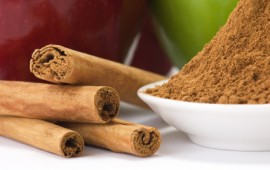 Wow, I wish I would have known about this while training on the balance beam! Although my mother did let us have cinnamon and sugar toast during “brinner” (breakfast for dinner).

Here health and fitness expert, motivational speaker, and wellness consultant Susan Smith Jones, PhD, recommends teaming up with cinnamon in her new book Walking on Air: Your 30-Day Inside and Out Rejuvenation Makeover.

Most people love the taste of cinnamon. Its fragrance conjures up thoughts of the holidays and special treats for the taste buds. Cinnamon is a highly versatile flavoring as well as a carminative that relieves bloating and gas.

Cinnamon’s most active ingredient is methylhydroxy chalcone polymer (MHCP), which increases the processing of blood sugar by 2,000%, or 20-fold. So using cinnamon in tiny amounts—even sprinkled in desserts—makes insulin more efficient. Cloves, turmeric, and bay leaves also work, but they’re weaker. This is great news! Avoiding high circulating levels of blood sugar and insulin may help ward off diabetes and obesity. Steady lower insulin levels are a sign of slower aging and greater longevity.

In fact, cinnamon has been the subject of numerous studies, which credit it with supporting healthy glucose metabolism and effectively maintaining healthy blood sugar levels. It also helps maintain healthy cholesterol and triglycerides levels, and is a time-honored digestive aid. It soothes upset stomach and relieves gas and bloating. Because it is also a warming circulatory tonic, it increases blood flow throughout the body. Researchers at Kansas State University have added cinnamon to the growing list of natural bacteria fighters, too. So spicing up your next glass of juice or cider or smoothie with cinnamon may be a good idea for reasons beyond great taste.

Cinnamon Tips: Sprinkle cinnamon on your morning coffee, toast or oatmeal. Double the amount in baked food recipes, sprinkle it on baked sweet potatoes, or create a zero-carb, flavorful and refreshing drink by adding a cinnamon stick to your glass or bottle of water. One stick lasts two days; you can transfer it from glass to glass, and then use a new stick.

TIP:  For more information, please visit: SusanSmithJones.com and click on Walking on Air.