Off the Mat with Shannon Miller 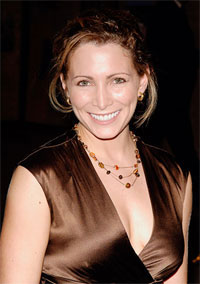 ST. PAUL, Minn. — Fifteen years after the 1996 Olympic team won gold in Atlanta, Shannon Miller is still the most decorated US gymnast of all time. With seven Olympic medals and back-to-back world titles, she dominated the sport in the ’90s. Miller, 34, is now married and has a son who turns two in October. Late last year, Miller was diagnosed with ovarian cancer, and after undergoing surgery and nine weeks of chemotherapy, she’s now cancer-free with a cure rate of 99%. We caught up with her at the U.S. gymnastics championships to find out how she’s feeling, what else she’s up to, and her thoughts on the current U.S. team.

Shannon Miller: Last year I went in for a regular exam and that’s when they found a 7cm cyst on my ovary. They didn’t really know what they were dealing with until they did the surgery. They took out my left ovary, and a couple of weeks later they got the pathology reports back and they said it was a higher grade malignancy than they had thought — and they would really like me to do 9 weeks of chemotherapy.

This is a very rare form of ovarian cancer — it’s not epithelial cancer. This is a cancer that mainly shows in older teenager and women in their 20s, so it’s not even on our radar usually. So, women, you need to go in and get those screenings! I had a great prognosis, but if I had waited, who knows? I felt totally fine; I had no symptoms.

espnW: How are you feeling now?

SM: I’m feeling really good, probably about 90 percent. I’m getting close. You walk out of treatment on your last day, expecting to go back to normal, but that’s not how it works. So you have to cut yourself some slack.

espnW: What have you been up to since you retired from gymnastics?

SM: Let’s see… I finished undergrad, went to law school, and I started my foundation, which I’m really proud of. Our goal is to fight childhood obesity. We currently have 3,000 children that we’re working with and we’ll have 7,000 by January. That’s really exciting and really fulfilling for me. And then my company, Shannon Miller Lifestyles is such a passion for me. It’s a health and fitness site for women, to open the lines of communication. I do a weekly radio show, and I talk to experts and women. I’ll also be over in London next year doing a lot of commentary there, which I’m excited about.

Read the rest of Shannon’s interview by Amy Van Deusen on the ESPNW website.