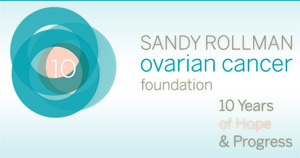 The Sandy Rollman Ovarian Cancer Foundation, Inc. is an active volunteer organization, a unique 501(c)(3) not-for-profit that is committed to finding an early detection test for ovarian cancer.  The Sandy Rollman Ovarian Cancer Foundation also works to fund improved treatments for the disease, and to develop educational programs which educate the public and physicians about ovarian cancer.

So mark your calendars, and get ready to login to Twitter and join the conversation.