Shannon Miller: I Didn’t Want My Cancer to Scare My Son

When Olympic gold medal-winning gymnast Shannon Miller underwent chemotherapy earlier this year, her biggest fear wasn’t about her own prognosis.

It was that her son Rocco might be afraid when she lost her hair.

“For me, the toughest part was facing my son, Rocco,” Miller, 34, tells PEOPLE. “He was 15 months old at the time that I was going through my treatment. He has lots of hair. And I wasn’t sure if he was going to be scared of Mommy … being bald.”

The Olympian, who underwent treatment after a malignant cyst was removed from her ovary, spoke with PEOPLE at the annual DreamBall in New York Thursday, an event to benefit Look Good … Feel Better, which assists cancer patients with their appearance and outlook.

“One piece of advice I received from a friend was to make sure I’m comfortable with how I look before introducing him to it, and I did that,” she explains. “I took some time understanding the wigs and scars and just being bald. But he took to it like a champ. He just thought it was another hairstyle for Mommy.”

Today, Rocco is “running and jumping,” Miller reports. “He’s about to turn 2 next month.”

He got the best birthday present imaginable a little early. “On Friday, I received a clean bill of health,” says the Olympian. “So I’m very excited. I’m doing very well.” 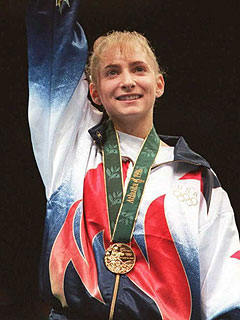 Shannon Miller at the Georgia Dome in Atlanta, 1996

To get through treatment, Miller adds that she relied on maintaining her fitness, as well as on some old friends. “The biggest help was keeping some type of fitness regime while going through chemo,” she says. “There is so much research coming out that it can actually help with preventing recurrences of some types of cancer.”

Members of the Magificent Seven, who took home the team gold with Miller at the 1996 Games, helped, too. “I actually had six members of my team with me in Jacksonville the day before I started chemo,” she says. “It was so great to see them and not think about the diagnosis.”

“I love her chemo curls,” Roberts, who went through chemotherapy herself in 2008, told PEOPLE. “She’s a real beacon of hope to many people.”