Olympic Gold Medalist and Ovarian Cancer Survivor, Shannon Miller, will be the Featured Speaker at the first-ever “Girls Night Out” Maureen Fund for Ovarian Cancer fundraiser, during the evening of Thursday, November 17 from 7:00 – 9:00pm. 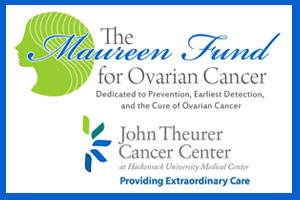 Paterson, New Jersey native, Sunda Croonquist, was voted “NJ’s Funniest Female” in her home state. Sunda’s stand up career took off when she created and performed in the longest running all female comedy show, “Femmes Fatales,” a weekly broadcast that ran on the NY Toyota Comedy Festival for eight years.  Now beginning her third season on JTV, she hosts the hottest late night talk show, “James and Sunda,” on Jewish Life Television with James “The Iceman” Harris.  Croonquist, a former private investigator with a degree in Criminal Justice, is married to attorney Mark Zafrin and has, in her words, “an uncontrollable fetish for shoes” that she passed down to her two “tween” aged daughters.

The girl next door with an edge, Kerri Louise, was a  Finalist on Last Comic Standing, regular on Oprah Winfrey; appeared on Access Hollywood, The Apprentice, and The View. Part Generation-X, part Girl-Next-Door, Kerri Louise is a pleasure to watch.  Her movie debut in The Next Karate Kid addicted her to show-biz, hence her move from her hometown of Boston to New York City, where she quickly established herself as a player in the top comedy clubs. These credits plus her appearance in the Marie Claire Magazine, the HBO Aspen Comedy Festival and the Montreal Comedy Festival have made Kerri an attraction.

“We are inviting the community for an evening of laughs, which we believe is very important to a person’s overall well-being,” said Ami Vaidya, M.D., Gynecologic Oncologist, John Theurer Cancer Center. “In addition, this support will help The Maureen Fund continue to identify women and families at high risk for ovarian cancer, assist patients and their families with prevention measures, and provide education to the general population.”

For more information about the “Girls Night Out” Maureen Fund for Ovarian Cancer fundraiser, please:

Panel Discussion “Training U: Beyond the Sport” –  THE PLAYERS Championship