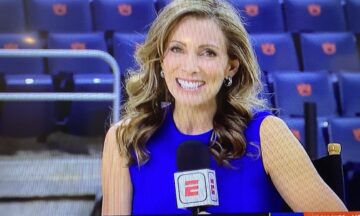 Miller, leader of the Magnificent 7 and a seven-time Olympic and World gold medalist, hosts the round table. Roethlisberger, a three-time NCAA all-around champion and Nissen Award recipient, and Peszek, a 2008 Olympic team silver medalist and NCAA all-around and two-time balance beam champion, give insights on the teams and athletes heading into regionals and then the finals. Both Roethlisberger and Peszek are part of the ESPN commentator crew for its coverage of the women’s collegiate season. Breaux, a nine-time SEC Gymnastics Coach of the Year and head gymnastics coach for Louisiana State University for 42 years, and Graba, one of the 2020 U.S. Women’s Gymnastics Olympic Team coaches and personal coach of Suni Lee (the 2020 Olympic all-around champion and Auburn University gymnast), provide a coach’s perspective.

Tonight’s show was shot at Neville Arena, home of the Auburn women’s gymnastics team. Neville Arena is one of four host sites for this year’s NCAA Regional Championships.

“I’m thrilled to host ‘Gymnastics Countdown,’ a preview show devoted to sharing the best of NCAA gymnastics,” said Miller, a commentator and 16-time Olympic and World medalist. “It is fantastic to see college gymnastics explode in recent years. There is more opportunity, more difficulty in routines, more Olympians entering the mix, record crowds and a lot of fun! Whether you’re a steadfast fan or new to the sport, we’ll breakdown this intense competition in a way that will have everyone on their feet for these incredible student-athletes.”

“On ‘Gymnastics Countdown,’ we share our thoughts and perspectives heading into the Regional Championships and then before the National Championships,” said Roethlisberger. “We appreciate the Tigers’ allowing us to shoot the show during one of their training sessions at Neville Arena and set the stage for competition later this week. I think this may be the first televised show of this type for women’s collegiate gymnastics and believe ‘Gymnastics Countdown’ is something fans have wanted for a long time. This has been one of the greatest seasons of women’s collegiate gymnastics, and it’s fun to be part of the show that is an exciting end to an amazing season.

Breaux, who retired as LSU’s coach in 2020, said, “I think so many collegiate programs this season are on the big stage – live national TV coverage, large crowds of 9,000-15,000 in stands, and other national coverage. Now is the perfect time to make this commitment to NCAA women’s gymnastics. Fans will learn more about what to expect while they follow their favorite team or gymnast progress to the nationals. We talk about the process and what fans can expect to see happen in all four NCAA Regionals and ultimately the finals.”

“Ozone Leotards is proud to provide competitive and training apparel for all gymnastics levels,” said Mike Martinez, Ozone’s CEO. “Women’s collegiate gymnastics is a vital and significant part of the gymnastics family, and we welcomed the presenting sponsor opportunity for this insightful fan programming to preview collegiate gymnastics’ regional and national championships.”

The Regional Championships are scheduled for March 31-April 2. In addition to Auburn, Ala., the other regional sites are Lloyd Noble Center in Norman, Okla., Alaska Airlines Arena in Seattle, Wash., and Reynolds Coliseum in Raleigh, N.C. Each region has nine teams. At each site, the first round is Wednesday, March 30, the second round on Thursday, March 31, and the regional final is Saturday, April 2. The National Championships are April 14-16 at Dickies Arena in Fort Worth, Texas. For more information, go to ncaa.com/sports/gymnastics-women.