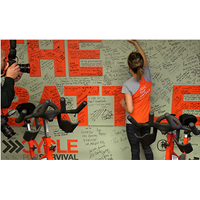 NEW YORK, February 16, 2016—Cycle for Survival, the national movement to beat rare cancers, will begin its annual series of indoor cycling events on Saturday at select Equinox clubs across the country. 100 percent of every dollar raised goes directly to rare cancer research and clinical trials led by Memorial Sloan Kettering Cancer Center (MSK), which owns and operates Cycle for Survival.  All funds raised are allocated to research within six months.

This year, more than 27,000 riders in 15 cities across the country will participate. They join together to experience a day of heart-pumping music, dancing, tributes, and inspiring stories. The Cycle for Survival community is dedicated to supporting innovative research that will change the way cancer is diagnosed and treated.

Visit www.CycleforSurvival.org to learn more about upcoming events and to find photos and videos.

Since 2007, Cycle for Survival has raised more than $90 million for research, earning recognition as the fastest-growing athletic fundraising event in the nation.* By April 1, Cycle for Survival is expected to reach a major milestone by surpassing $100 million raised to beat rare cancers.

About half of all Americans with cancer have rare forms of the disease, which include thyroid, brain, ovarian, pancreatic, all pediatric cancers, and many others. Rare cancer research is typically underfunded—often leaving patients with few or no proven treatments. As doctors and researchers race against the clock to develop new options, Cycle for Survival provides urgently needed funding.

For more information about the 2016 rides, or to join the Cycle for Survival movement, visit http://www.CycleforSurvival.org/

“As Cycle for Survival celebrates its tenth year, I want to express deep gratitude, on behalf of everyone at Memorial Sloan Kettering, to the participants and donors who are dedicated to supporting rare cancer research and novel targeted therapies. With 100 percent of every dollar raised going to research, we are seeing incredible progress that will continue to lead to new and better treatment options. I am proud to be a part of this community that is determined to help patients everywhere. I look forward to thanking our participants in person at the New York rides in March.”

“Equinox is so proud to be the founding partner of Cycle for Survival. It has become a huge part of our company, and so many of our employees, at every level, participate in this movement. We are determined to do our part to help beat rare cancers. The energy is tremendous at every Cycle for Survival event happening across the country in February and March. I’m pumped up and ready to celebrate with this amazing community at the upcoming rides.”

“I’ve been part of the Cycle for Survival community since the very first event, which was at one location on one day. When I reflect on that single event transforming into a national movement over the past decade, I am in awe. Surpassing $100 million raised for rare cancer research in just ten years is an achievement every participant can be proud of—whether it’s your tenth year or your first. I am excited about all we can accomplish together in the next decade, and beyond, to help everyone fighting a rare cancer.”

MSK—the world’s oldest and largest private cancer center—has devoted more than 125 years to exceptional patient care, innovative research, and outstanding educational programs. Today, it is one of 41 National Cancer Institute–designated Comprehensive Cancer Centers, with state-of-the-art science flourishing side by side with clinical studies and treatment. The close collaboration between MSK’s physicians and scientists is one of its unique strengths, enabling it to provide patients with the best care available as researchers work to discover more-effective strategies to prevent, control, and ultimately cure cancer in the future. MSK’s education programs train future physicians and scientists, and the knowledge and experience they gain has an impact on cancer treatment and biomedical research around the world.