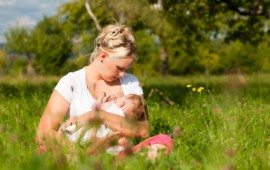 Breast augmentation is one of the most popular forms of plastic surgery in the United States.

In fact, statistics provided by the American Society of Plastic Surgeons indicate that approximately 300,000 women underwent breast augmentation surgery during 2010 The surgery, which is performed to increase breast size, involves inserting silicone or saline filled implants inside breast tissue. Many women who receive implants later become pregnant and wish to breastfeed. This often leads to questions about the surgery’s effect on milk production and whether or not the implants pose to a threat to nursing babies.

Milk ducts found inside a woman’s breast become active during pregnancy. After the baby’s arrival, these ducts move the milk down to the nipple, where it is expressed when the baby nurses. Since breast tissue is affected by implants and the surgery itself, there is a risk that milk supply will be lessened after breast augmentation.

There are three issues that influence whether or not milk supply is diminished by breast implants. These include:

Extremely large implants are more likely to inhibit breastfeeding because they compress milk ducts, making it difficult for them to work properly. Implants placed under the chest wall interfere with milk supply less than those placed beneath the milk ducts. Incisions made on the areola itself may cause problems if nerves were damaged during the procedure, as this could lead to lessened sensitivity and problems with letdown.

Safety is another common worry for women who have undergone breast augmentation surgery. There have been concerns in the past that the silicone used to fill implants could leak into the milk supply, but researchers have concluded that it poses no threat.

Some women who have undergone breast augmentation surgery opt to have the implants removed before attempting to become pregnant. This surgery poses its own risk, however, as damage to breast tissue may occur anytime surgery is performed. There are various ways to increase milk supply, including pumping, dietary changes and even herbal supplements. A certified lactation consultant can help women address their concerns and find the most effective way to increase milk supply.

Those who are considering the surgery but are worried about later affects on breastfeeding should talk the issue over with a board-certified plastic surgeon. This not only helps to alleviate concerns, but also ensures that the surgery is performed in a way that will be the least likely to cause problems with nursing in the future.

Breastfeeding after breast augmentation surgery is not impossible, but it may pose difficulties. It’s important that women who have had the surgery or are considering it consult with medical professionals who can help make it possible to successfully breastfeed their little ones.

Written by Ms. Lisa Moore, a beauty and health author. Contact her at lisa_moore80@ymail.com